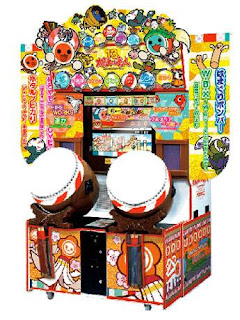 The 13th Taiko no Tatsujin, released just five months after the wildly successful Taiko 12.5. Taiko 13 takes the game to new heights, being the first version to be used in a nationwide (Japan, of course) official Taiko no Tatsujin tournament.

Being the first arcade to introduce alternate methods of unlocking secret songs other than entering secret codes, a few of them were leaked to players long before the official secret code was given out. Even Namco played along by offering players hints along the way. There was a lot of deduction on the exact method to unlock songs without secret codes, but all of them required an expert hand in FCing a song on triple speed or something or other.

The song list was once again revolutionary, and had enough new songs up its sleeve even though its generation partner, Taiko Wii 2 was released ahead of it. Most notable was the new 2000 song, Hataraku 2000, which challenges even the mightiest of players to a mad challenge. With Hataraku 2000, the ‘elite four’ of Taiko was finally all present on a single arcade- Kita Saitama 2000, Rotter Tarmination (Ura), Ryougen no Mai and this. Another notable song is Monster Hunter Medley, which once again is Namco’s effort to branch out to the most popular trends in Japan. A sneaky April Fools joke was also inserted by Namco into this arcade in advance. They really know how to plan their timed release of information to the players.

Taiko 13 is also the first arcade to have an ‘ending theme song’, as said by the Taiko Team in their blog when the final code containing mint tears and said ending song was finally given out.

We have Jubeat and Groove Coaster. Two of the more popular Rhythm games tumbling out of Japan is the cult classic Jubeat and the rising star with a big name in mobile gaming, Groove Read more…

State of the Arcade July 15th

The state of the Arcade: It’s that time again where we speak about what is coming and when it’s coming, what needs fixing and what you can do for us so we can make sure Read more…

We are happy to announce that we will be a location as part of a location test that will be pushing Konami’s new attempt to internationalise the Dance Dance Revolution franchise. In the current re-imagining Read more…